It Takes A Village

This morning I was reading Shoot from the Heart: Successful Filmmaking from a Sundance Rebel by Diane Bell. I’m at the part that talks about financing a short film, and it made me think about how incredibly grateful I am for YOU. Let me explain. 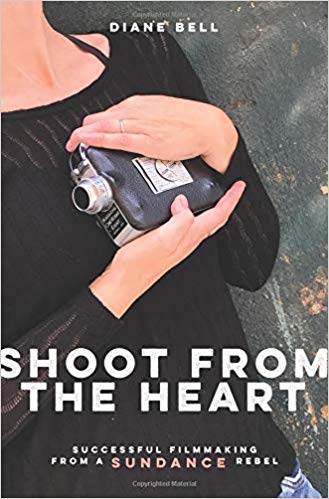 A good book for aspiring filmmakers!

Crowdfunding with ALL the feels

People often don’t realize how much work goes into a successful crowdfunding campaign. Running one is basically like having a full time job with the added component of being on a gambler’s emotional rollercoaster (highs for the wins, and deep lows for the losses).

I remember how it felt when I started working with my social media team on our Indiegogo campaign. I was scared — worried that the campaign would be a flop. I felt intimidated — none of us had run a campaign before, so it was a steep learning curve. And I was excited — communications strategizing really gets me fired up, and I was eager to collaborate with my team of talented and knowledgeable colleagues.

Over a very short period of time (we had an insane launch deadline), we poured 200+ hours into researching and developing perk ideas, crafting a compelling pitch, editing the sample trailer, setting up social media accounts, and developing a posting strategy and associated graphic elements. We got advice from our crew members with crowdfunding experience. We convinced friends and family to review our written copy and give critical feedback. We recorded support videos, and we tested the effectiveness of our trailer with anyone who would watch it. And every hour that we and others put into this work was given freely because people believed in the project.

My amazing social media team during the Indiegogo campaign.

Each act ads up

Then, it was time to launch the campaign. Our goal was to raise 30% in the first 3 days, because, according to Indiegogo, campaigns that can do this have a MUCH better chance of success. I sent out personalized emails to my entire contact list. I blasted my Facebook page. I talked to people in person and texted those who lived far away. And our whole project team, plus many of our friends and family, did the same.

We didn’t reach our 30% goal but we were incredibly close, raising just over 20%. We kept pushing, but as with pretty much every crowdfunding campaign, the energy of support surrounding the campaign died out shortly after the first week. Those who were planning to donate had done so, and our message wasn’t reaching much further. 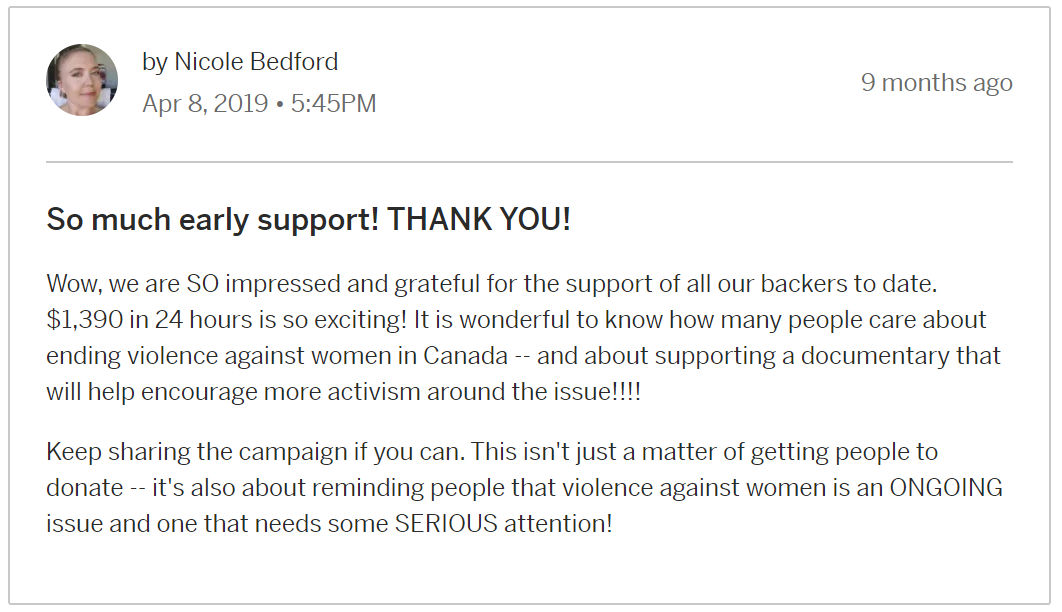 I should have remembered all the support we received so far!

Even though I knew this lull was coming, I couldn’t help but feel disheartened. I kept alternating between thoughts like: ‘Why don’t people care enough about women and children stuck in cycles of violence to donate to our film? Don’t they see how it’s going to make such a difference? The world is the worst.’, and ‘But look at ALL the people who have supported the campaign so far. So many people have shared it, donated, and shown they care. I am so thankful to have these people as part of my team.’ Melodramatic, yes — but highly reflective of the types of lows that activists working to support a cause can experience.

Overall, I knew we were creating this documentary no matter the funding. But with the campaign stagnated at 37% funded, I got stuck focusing on what we were lacking instead of focusing on what we had gained: A growing community of dedicated supporters who believed in our cause. Thankfully, a cue to re-focus was on the horizon.

The push that served as a reminder

A couple weeks after the campaign launch, when contributions had basically ceased, I was out with my sister on a mission to get ice cream. Cone in hand, I decided to check the campaign, and almost wore my ice cream as a result: The campaign had suddenly grown to 95% funded! I was completely shocked. I kept exclaiming “OMFG” as my sister drove us back to her apartment. 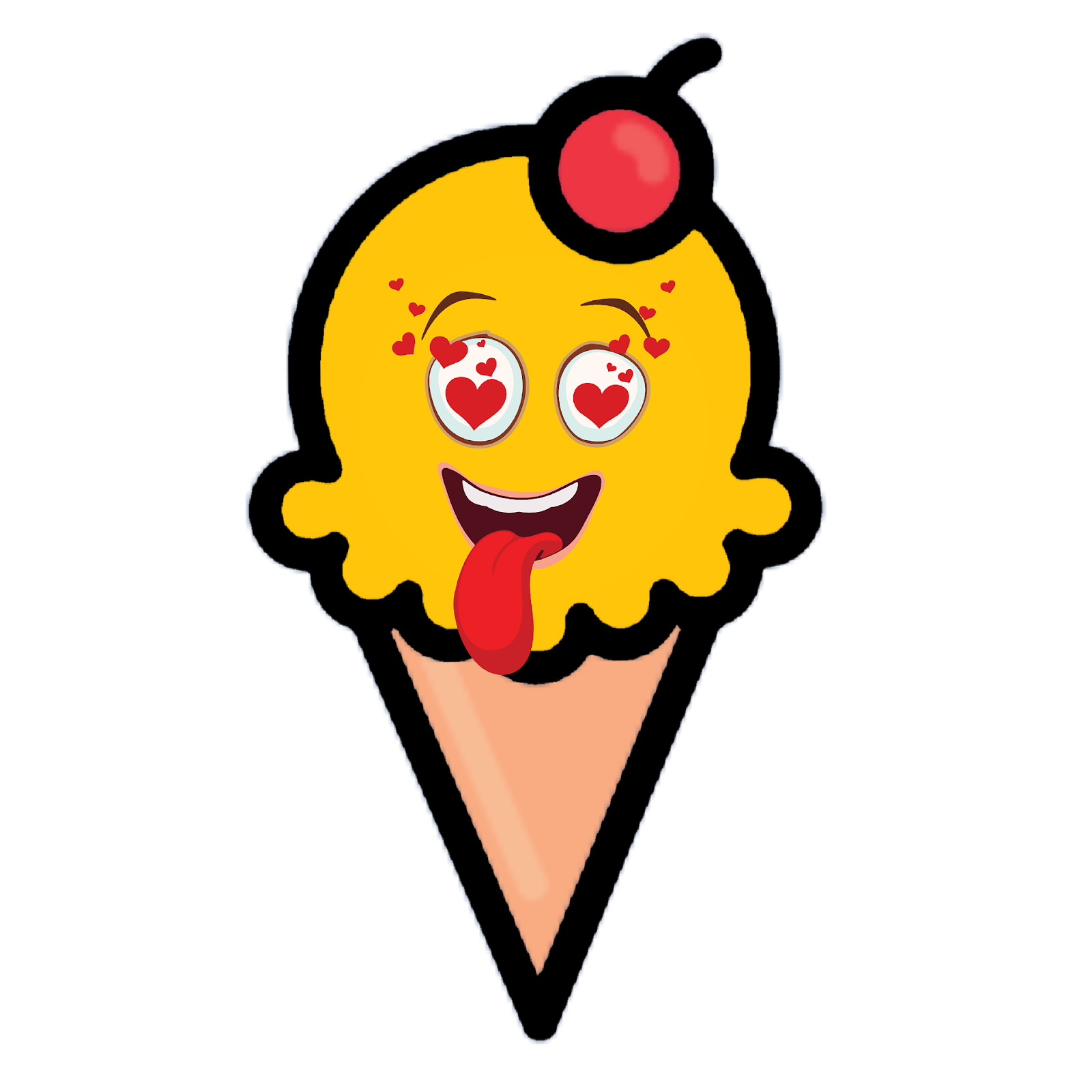 This was me: excited, slightly dazed ice cream.

While I was (and still am) insanely insanely grateful for the contribution that re-ignited our campaign, what it made me think deeply about was the individuals behind the overall success of the campaign. No matter how much each had contributed, the reality was that a person was behind each dollar and each supportive social media post — a person who cared about the film, who cared about the team making the film, and who believed that by building up our little village together, we could make this film a reality.

Grateful for each one of you

Like anything in life, it really does take a village to make something happen — whether it’s raising a child, creating a film, or building a movement that will change the world for the better.

So THANK YOU — You who have donated to our campaign; you who follow, like, and share our social media posts; you reading this blog post right now — thank you for being part of our village! With your small steps you are making this film, and this movement to end violence against women (and all people), possible.